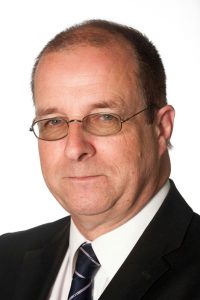 After thirteen and a half years as a Retail Manager for a national chain, I moved into Financial Services with Prudential, in 1993. I was a Financial Consultant with Prudential selling its life assurance, pension, savings and investment contracts as well as general insurance .I started in the Penzance office, then worked out of the Truro office and finally out of the Plymouth office.

In 2000 I joined Allied Dunbar as a Financial Adviser, whereby I advised and sold Allied Dunbar products, and was based in the office in Old Bridge Street Truro. Subsequently, I then moved to the new office in Lemon Street, where I remained until I became independent in May 2002, joining Anderson Lloyd LLP.

Since then I have remained with Anderson Lloyd LLP offering advice from the whole of the market, where I have become a partner. As well as looking after my existing client base, I have also been involved in advising corporate clients, I also look after the IT needs of Anderson Lloyd LLP.

In my spare time, I enjoy spending time with family and friends and love the outdoors. I also sit on a board of Trustees for a major local charity organisation, where I am also the Company Secretary.

Get a Free Consultation Today

When you get in touch, we’ll appoint you your own dedicated independent financial adviser to find out how we can help you. Better still, this initial consultation is completely free of cost or obligation.

Just leave your contact details and one of our advisers will call when it's convenient for you.

We use cookies on our site to improve the browsing experience for our visitors. If you continue browsing please accept the use of cookies.
More Info Accept